Are you Blaming the Customer or Selling the Experience?

I love checking out art museums on vacation. I usually meet the docent because I stand too close to the artwork and get an occasional, “Step back sir.”

Art museums are sterile and quiet with people glaring at you, protecting the art. Music stores and other retail shops that sell hands-on products should not resemble art museums.

Unless you passionately believe people can and should be making music with your instruments, your merchandising will be typical, your customer service will be nil, you’ll say times have changed and you’ll start blaming the very people you serve – your customers.

You have to reach all of them and invite each one to create music right there in your store.

Everyone has lost customers, even as music stores have seen an uptick in new business. And that’s why it’s still more important how you treat the first-timer, not the regular.

There HAS to be a sales process if you expect them to take the instrument home. Facts are boring. What does the instrument do for the musician, how does it help them express themselves in a new way? That’s what sells…

The other day I was talking with Richard, a music store owner, and he related a story about a guitar shopper. Richard had spent about 20 minutes building trust and rapport and had gotten to the point in the sale where the shopper said, “I’ll have to think about it.” Richard restated several points the shopper had said were important to him. Then he did what a salesperson does, he simply said, “You’ll kick yourself if you walk out of here without it.” And then he shut up.

After a bit of silence, the shopper’s wife nudged him and said, “You know he’s right.” The shopper agreed and purchased the guitar.

That’s one example of how to close a sale.

But closing a sale like that doesn’t work if you haven’t built the foundation of trust with the shopper first.

To that point, the CEO of Gibson Guitars once noted that music stores have little seating, are generally unwelcoming to women and are often located in seedy districts that turn off families.

I would add the whole joy of music can be absent in some old school music stores.

How to know if your store needs an update

• The fixtures are frequently old, the ceiling light covers have yellowed, the carpets are dirty, and often they are painted in blacks and grays – hardly the stuff of modern retailing.

• Rows and rows of expensive guitars hang on the wall out of reach, either with no price tags or the same yellow sale tags on each one, neither which encourages exploration.

• It’s not just guitar stores, I’ve also been in piano stores with signs, “Do Not Play Piano.” Geez.

• Top that off with a staff who might look down their noses at anyone but pros and you’ve got yourself a very intimidating environment.

I get it, music stores, you may be hoping for Robert Plant or Robert Fripp to walk in and buy a guitar but your money – your entire business model –  comes from the wannabes – the guy who just wants to pick up an instrument and try something new, the woman who wants to start taking lessons again, the newbie who may not be able to communicate any other way but through music.

The problem with many music stores is that they employ untrained staff – trained as musicians, but untrained in how to engage strangers, so they largely want to get rid of the shopper looking at an instrument rather than encourage them to pick it up and use it. The staff has to want to engage with shoppers, not commiserate behind the counter.

Fix the training of your staff and you fix the engagement of your shoppers.

And you fix sales.

See Also:  7 Questions That Must Get a “Yes” to Close More Retail Sales

Many bemoan the lack of guitar heroes who may have driven sales in the past. Be that as it may, what are you going to do now to survive?

I don’t know if you’ve noticed but School of Rock franchises are growing by leaps and bounds and attendance at the annual NAMM music show set record attendance There’s plenty of interest in making music.

Why do people stop and look at a street performer or watch a video of someone playing an instrument? Because they wish they could express themselves like that!

I’ve worked with several music retailers including Cosmo Music in Toronto who are doing fine encouraging new talent and selling instruments. They have an extensive offering of lessons, practice rooms, DJ rentals, a complete repair department; they host performances and offer a performance space for rental. They teach, sell, show, and celebrate the experience of making music. And they have an extensive employee training department. No wonder they received the 2018 NAMM Milestone Award for 50 years of service in the music instrument industry. 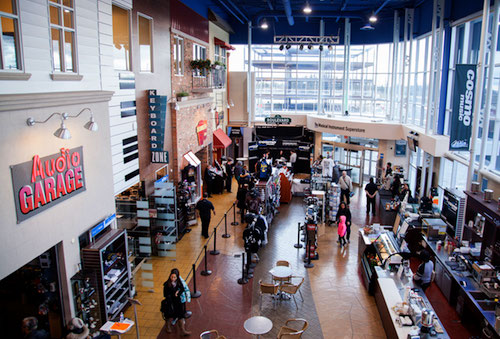 Yet I’m shocked when I go into most music stores and don’t see people trying out the instruments.

You’re a store, not a museum!

Now maybe you’re reading this but you’re a clothing store. Don’t think this post doesn’t apply to you! Why don’t I hear people saying, “Just try it on” and encouraging shoppers to use the fitting rooms?

If you’re a camera store, why are the cameras locked up so you have to approach some surly camera guy to open the case and then have to play with it in front of him as he judges whether you can afford it.

If you’re a sporting goods store, why don’t I hear conversations about the kid’s sports teams when the family is buying the gear?

Because you foolishly think you’re in the product business.

You still think that blathering off all the features makes a whit of difference to most people. That your employees knowing the in’s and out’s of manufacturing something translates to sales.

Maybe once upon a time but not now…

Your employees have to be able to make the complex simple so the shopper says, I have to have it.

You have to be in the business of selling the experience of using the product!

You can have the world’s best musician, but if she or he can’t get someone else excited about it… someone who has a casual interest, they are of little use to shoppers – or to you.

Here’s the shocking truth for most retailers….

You have sucked the fun out of your stores.

The joy of planting a garden, the fun of a weekend do-it-yourself project, the joy of a new outfit, you name it.

You’re just a warehouse full of stuff waiting for someone to come in and ask for a particular item.

That’s no way to run a business. Unless you’re Amazon or Walmart.

Most retailers would kill for the opportunity to be able to create a sense of wonder, a sense of accomplishment, and a connection with their shoppers!

But even with all the great merchandise you may have, you must have a well-trained sales staff to deliver…

A person who is well-trained can sell anything because opening your heart to someone is product agnostic; it doesn’t depend on the merchandise.

To be able to consistently get the sale, you need to teach a step-by-step process of building rapport, presenting the merchandise, and getting the sale.

Many experienced owners train as things come up, say this, don’t do that, but those tiny moments are worthless. Unless there is a process underpinning every engagement, selling nuances are lost.

And without training, your employees will judge if someone is a buyer or a tire-kicker. That costs you because people new to quilting or photography or kayaking or playing the marimba may not be eager to tell you; they need to relax and feel they matter first.

Unless they feel they matter in your store, you’re just a slower, more expensive, and judgmental version of online retail and you’ll go the way of many record stores who stopped sharing the joy of music and just warehoused records.

You wouldn’t recognize me if you saw me when I first walked into a music store looking for piano music in fifth grade. I was shy and afraid I’d be judged for wanting a Big Note version of Born Free. But music called to me and eventually I got my degree in conducting.

But that only happened with practice. Lots of practice.

And that’s my final point to you. Training employees is not mere exposure to material, it is mastery.

I can show you a D major scale, but just knowing it won’t make you Elton John. You have to practice over and over again until you can play that scale – and many others – without thinking.

You won’t be bitching about Amazon stealing your customers or complaining yours are dying out.

You’ll welcome everyone with an open heart and be curious about why today, out of all the stores they could have gone in, did they walk into yours.

How to Do a Job Analysis and Why It’s Important

How to Do a Job Analysis and Why It’s Important

Thank You For Your Support

Any cookies that may not be particularly necessary for the website to function and is used specifically to collect user personal data via analytics, ads, other embedded contents are termed as non-necessary cookies. It is mandatory to procure user consent prior to running these cookies on your website.